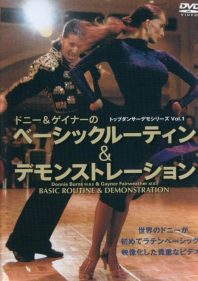 1. Donnie and Gaynor demonstrate 5 complete choreography programmes for 5 dances (Cha Cha, Samba, Rumba, Paso Doble, Jive.)
Without teaching the technique, it simply shows how Donnie and Gaynor dance dance in the studio conditions.
Each routine is presented to the music and then to the count and the music simultaneously.

2. Donnie and Gaynor are performing a show in Japan with the audience and with full light and costume changes.

There are no reviews yet.

Be the first to review “Basic Routine and Demonstration” Cancel reply

This site uses Akismet to reduce spam. Learn how your comment data is processed.